This interactive installation was developed by Peter Musk for SLQ Fun Palace 2015. 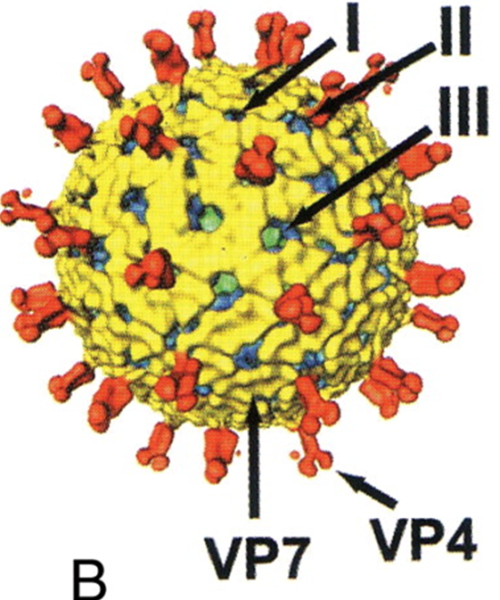 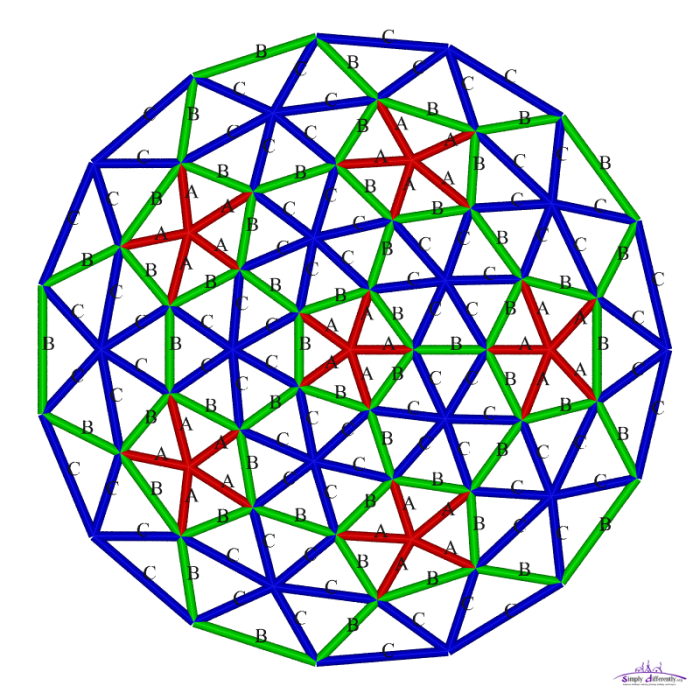 This project aimed to create a 2m diameter model of a real virus (Rotavirus) that could be assembled on the day of Fun palace. Rotavirus was chosen because it is a cause of common disease (diarrohoea) and it has a structure which is easy to reproduce.

Structural assembly and mounting on a 2.4m high stand was done by the facilitator, and surface elements (virus proteins) were prepared from printed paper templates by participants. Since virus coats are made up of self-assembling identical parts of only a few shapes, this was suitable for a walk-up activity, with little training required for a participant to produce a useful element for the installation.

The skeleton of the virus was built from a geodesic dome made from 12mm poly conduit, and joined with acrylic hubs made according to the required angles. The conduit pieces were required in 3 different lengths, and each one had a slot cut at both ends, on a 12.5 degree angle (the hub sat on the surface, and the spokes bent downwards and away from the surface to create a spherical shape). Many hundreds of individual struts and hubs were required, and preparation time was considerable. This structure was recovered at the end of the display, and stored for future use if required.

The surface of the virus is composed of abutting pentagons and hexagons (see diagram above), which were cut to scale from cardboard, and attached to the conduit struts with hot glue. Different folded paper shapes representing the repeating virus coat proteins were designed to be folded from paper templates, using Pepakura (a paper folding program). This model was taken from https://simplydifferently.org/Geodesic_Dome_Notes?page=3, and dimensions of frame materials calculated using the online calculator found there.

The final construction was about a 3/4 model (ie: almost a complete sphere), to allow access during construction but still showing a spherical shape.

The frame was constructed from 12mm polypipe struts, cut to lengths calculated using the website mentioned above. A 3mm hole was drilled through each end of the strut (below the predicted slot location, and going through the pipe to make a hole on either side) to allow a zip tie to fix the strut to the appropriate hub. Then, the struts had a slot cut into each end at 12.5 degrees from perpendicular to take the tongue of the hub.

Hubs were cut from 3mm acrylic using the files here (quantity required is noted in the file): megavirus_hubs.zip

The triangular surfaces of the model were cut from cardboard, but needed to reflect the size and variety of strut arrangements. In order to make assembly more intuitive, a colour coding key was implemented in the designs. Files for making these triangles are here: triangle_panels.zip

Accurate 3D models of the Rotavirus are available from http://images.3d4medical.com/Rotavirus-71-image_RM4192.html and a 3D printable version from here: https://3dprint.nih.gov/discover/3dpx-001515.

The 3D mesh from NIH was imported into Meshmaker (http://meshmaker.com/), and manipulated to produce simplified representations of the main virus proteins, as shown in the diagram below: the yellow (outlined on the triangle designs above), red and blue areas represent the three forms made for the model. The blue form was reduced to that part visible from outside the coat (essentially a ring around a hole at each hub).

These meshes were imported into Pepakura (http://www.tamasoft.co.jp/pepakura-en/ a cheap software utility for turning 3D meshes into foldable paper shapes), and templates produced for printing.

In the workshop, participants folded their choice of coloured paper with a template for a virus protein, and these were then hot glued onto the cardboard triangles covering the frame.

Assembly began with a pentagonal part, with each strut tied to the hub as required. This pentagon was then raised to the top of the wooden support frame, and screwed in place.

Struts were then attached, working around the model one horizontal ring of elements at a time to keep the structure balanced. After several layers had been completed, and the model was seen to begin to sag, and wooden cross member supports were fixed to the internal frame to hold the growing skeleton in a spherical shape.

Assembly proceeded with reference to the geodesic model above until complete, before hot gluing the cardboard triangles onto the skeleton and making places to attach the folded paper proteins.

Preparation of the struts and hubs took an enormous amount of time (several days) despite using bespoke jigs for cutting to length, slotting and drilling. The resulting mass of materials took up several tubs, which needed to be moved to the site.

Zip ties worked well, but were very fiddly to get into place.

Some hubs snapped off their lugs during construction, though this did not make them useless since the zip ties held everything in place.

Building the skeleton also took much longer than expected (approx 6-8hrs), and while this was intended to be visible to passers-by, partial completion would have put more focus on coat assembly.

A wooden frame was identified as crucial at the last minute, and needed to be robust enough to take the weight, as well as tall enough to make the model visible. A ladder was therefore required to place the topmost pieces.

The cardboard triangles were designed to be exactly the expected dimensions, and this made for some overlap because the final frame was more flexible than expected. making these pieces about 5mm smaller in each direction would help.

Participants found some of the folding designs confusing and complicated, and tended to make the simplest one available. Simplified designs could avoid this.

Didactics explaining what was being achieved were not completed, and much time was lost explaining to participants.

The size and complexity was a great attraction, and participants were very interested in the story behind this project. As a media event it was very successful, but the large volume of work required makes better management important.