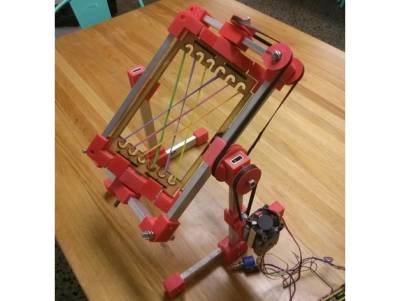 This project was developed by Byron & The Hack evening team as a Hack the Evening project at The Edge in 2017.

More information can be found at https://www.thingiverse.com/thing:2027135

The rotocaster is a device that allows hollow objects to be moulded from quick setting liquid materials such as polyurethane, silicone or chocolate.
Using a two part mould, slow-setting liquid material is added, the mould clamped together, and then placed in between the network of rubber bands seen. When switched on, the frames simultaneously rotate slowly in perpendicular directions, coating the inside of the mould with the material as it sets. If the quantities are chosen correctly, a hollow object is formed with the external face matching the mould used (wall thickness will depend on the amount of material added to the mould).

This device was used in a workshop making hollow chocolate Easter eggs during 2017.
Moulds were made using the Vacuum Former.

List the materials you used, with dimensions, and quantities.

(List all the tools you used to complete the project, from #1 Philips screwdrivers, to the CNC machine)

Don't forget to include design files for CNC, laser cutting or 3D printing but remember they need to be zipped before uploading to the Wiki (it is also useful if they are in a transferable format, .svg rather than .ai, for example)).

(This is where you can put ideas that you tried, but which did not work & and why)

This were you put external links, if they have not appeared in the Instructions.