This is an archived page , no further development is anticipated

The first step is to make an SD card that the pi can use as an Operating System. The pi uses the SD as its main file system, and we've got a couple of options here for video playback.

To do this we write a disk image to an SD card using a disk utility - remember - This wipes the SD card!! 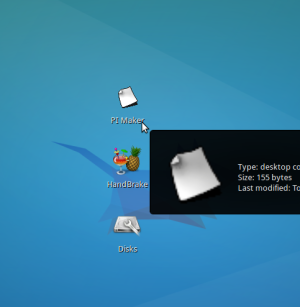 The pimaker is a re-purposed old desktop computer running Xubuntu 14.04. It is a customised install for making rasperry pi (or any other disk image) using a basic rough and ready script GUI.

So there were issues with the RPi 3 and the image we have on the pimaker box. I've had to build a new image and adjust some of the scripting to make it work. I also loaded the files onto the SD Card and eliminated the step with the USB Stick (as the USBs that QM have for QANZAC don't register on the RPis; weird.

I used Tim Swartz's RPi Video Looper Image which seems to work fine the the RPi 3. I made a change in the startvideo.sh (used nano startvideo.sh) modifying the omx setting listed in the (somewhere in the bottom third of the script) from -o hdmi to -o local, which switches the sound playback to the 3.5 jack.

After finalising this, ran the RPi Config and expanded out the file system to make use of the whole disk

From the terminal used the following command line to copy files;

Pull the USB at end of shutdown and the RPi is good to go.