This is the story of how the Glitch Forest came to life!

Glitch Forest was inspired by three Imagined Things from The Well, Glitch, The Great Darkness and Gargor.

Glitch is a thing imagined by Lloyd, aged 12, on Thursday July 8

The full name of this thing is: Glitch

It can be found in: Abandoned game

It is known that: A character that is forgotten, from an old arcade machine, got abandoned and never touched again. The Great Darkness is a thing imagined by Jasmine, aged 12 years, on Thursday July 8

The full name of this thing is: The Great Darkness

It can be found in: The Black Forests (the dark part)

It is known that: They came to be when a drought killed a lot of livestock and a farmer had one wish. He wished for his cattle to come back to life. Unfortunately, this meant that the skeletons came back to life. They moved to the forest when the farmer abandoned them, and fungi began to grow on them. Their skills differ, so do the colour of the fur and the types of fungi. Gargor is a thing imagined by Oscar on Thursday July 8

The full name of this thing is: Gargor from a small Roman villa of Lomahatten

It can be found in: His species can be found in the mountains around the small Roman villa of Lomahatten which is surrounded with dozens of exotic plants inside of a ring of mountains (in my imagination)

It is known that: Plants live between his joints, moss on his back, ferns and other plants on top, calm and at bliss 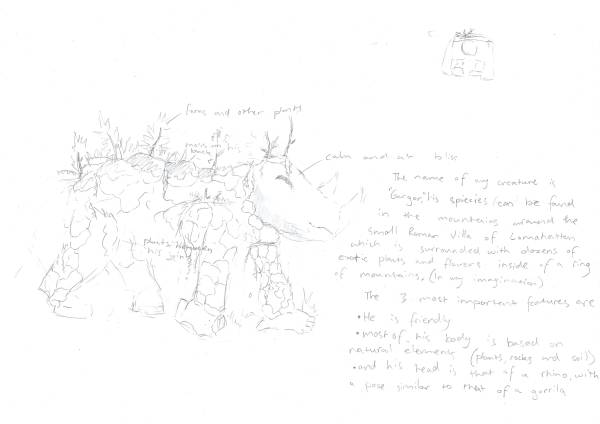 The Conceptual Journey: QUT Creative Industries students went through a fairly lengthy conceptual development process to arrive at the Glitch Forest. It was a fully collaborative process that encompassed no one persons ideas. It started with a deep dive into the well, followed by creative writing tasks inspired and expanding on the Imagined Things in the well. The students then participated in group writing tasks, individual and group visual research, sharing and experimentation. Mycelium was a recurring theme, as was the idea of a glitch, of a journey through and of a landscape that wasn't quite what it seemed. And so, The Glitch Forest was born. The Design Journey: After identifying the world that they wanted to crate, students did a gallery site visit to take measurements to start converting the world to design and to look at how audience members might journey through the space. Students split into groups to work on: Big Momma, Baby Mic and the Smallies and design processes for each ranged from just experiment and make through to physical modelling and 3D modelling. The Fabrication Journey: Students used three different fabrication methods for the mycelium as they brought Glitch Forest to life. Big Momma, being 4m tall, utilised the beam method and was then shaped with strapping and dressed with different cardboard and paper textures. Baby Mic was designed and cut using the CNC router and then joined together and papered and the Smallies were created using corrugated cardboard and straws. This was a diverse group that also wanted to experiment with projection, lighting and writing and as such, projection and LED strip lighting was incorporated into Big Momma and Baby Mic to allow them to communicate with each other and give a sense of the Glitch. A field guide was also written, illustrated, printed and bound by a couple of the students.