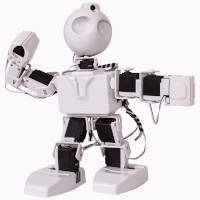 The EZ-Robot is comprised of EZ-Bits, EZ-Robots are DIY assembly robots, with high level coding and control options available via PC or tablet, bringing sophisticated robotics to users of all abilities.

EZ Robot kits are comprised of 'EZ-Bits' - heavy duty servo motors which clip together to form the limbs of the robot. EZ-Bit servo's connect to the 'brain' of the robot, a Wi-Fi robot controller, enabling direct control of the robot via tablet or PC. Additional EZ-Bits can be purchased or 3D printed from the EZ-Builder software.

The EZ-Robot is controlled by a laptop or tablet.

State Library has kits of this item available for loan to libraries within the Regional Libraries Queensland and Indigenous Knowledge Centres network. Libraries can place a reservation through the Aurora catalogue (availability is subject to existing reservations, loans and associated return dates).

The kits are for use by patrons within the library only, as part of supervised library programming. They will not be listed in the public online catalogue for personal reservation.

At Redcliffe Library (Moreton Bay Region Libraries), I had the pleasure of organising a workshop for teenagers on how to use EZ-Robot Battle Flippers. I found that Battle Flippers can be used as a great introduction to robots and coding for pre-teens and younger teenagers that haven’t had any previous experience or just the basics with coding. The workshop went for two hours and I set up the room into three stations.

I found that setting up the room like this worked well because I then had all the participants engaged in some activity. I also found that it was easier to follow the assembly instructions using the laptops first and then moving to the iPads to use the app.

The Battle Flippers came ready to assemble and consists of a range of servos that slide together. We used the EZ-Builder program on the laptops which takes the participants through a step-by-step assembly of each robot. This gives the participants a great understanding of the inner workings of a robot and their circuit board.

Once the robots are assembled the participants can code the robots to move in a sequence, film the room and/or record voices. This can all be done using the EZ-Builder program on the laptops.

After the participants, has familiarized themselves with the EZ-Builder program it was time to move to the iPads and the different activities I had set up. Using Wi-Fi and the EZ-Builder app participants found and connected to their Battle Flipper so they could follow it around the room selecting the pre-coded buttons to control the robots’ movements, to use the built-in camera and record voices.

Overall, we had a great afternoon playing with the Battle Flippers and using coding.