To create an interactive element that's hands free (Covid safe!), there will be a vertical digital screen (TVs/Monitors) that will be used to display Snap Camera and a range of AR 'costumes' inspired by the Grumpus Imagined Things.

The Wobbly Tooth Shark was used as a test model for a Snapchat lens to show the capabilities of applying one of the 3D models we already had created to create an interactive Grumpus costume. 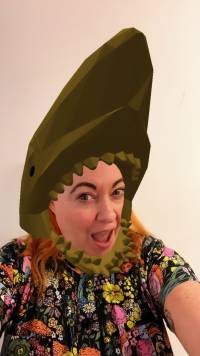